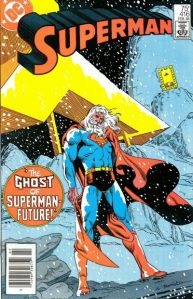 The cover for Superman 416, drawn by Eduardo Bareto. with the interior stories written by Elloit S! Maggin, pencilled by Curt Swan and inked by Al Williamson!

Comic book artist Al Williamson died last Saturday, June 12, 2010. He was born on March 21, 1931. His comic book career began when he was 17 years old, and he was the youngest artist in the EC Comics bullpen. He is most well known for his adventure and science fiction stories, such as the comic strip and book FLASH GORDON, as well as the comic book adaption of the movie STAR WARS: THE EMPIRE STRIKES BACK. Beginning in the 1980’s he had a 20 year career as a comic book inker, first at DC and then Marvel.

At DC, Al first drew and inked an 8 page Superman story, THE LIVING LEGENDS OF SUPERMAN, for SUPERMAN 400, October 1984. He inked SUPERMAN issues 408 – 416, with the exception of 411, which was the Julius Schwartz birthday issue (discussed in episode 78). He also inked Superman stories for DC COMICS PRESENTS 79 and 85-87. Al inked two covers for SUPERMAN, 408 and 409.

This episode highlights the one issue of SUPERMAN that I have which Al Williamson inked, 416, February 1986, published on November 18, 1985. The first story, THE EINSTEIN CONNECTION, was written by Elliot S! Maggin, pencilled by Curt Swan, colored by Gene D’Angelo and lettered by Ed King. This story was reprinted in the trade paperback SUPERMAN VS. LEX LUTHOR. The second story, THE GHOST OF SUPERMAN-FUTURE, had the same creative team, except for letterer Dave Andrews.

SUPERMAN FAN PODCAST is a proud member of the LEAGUE OF COMIC BOOK PODCASTERS at http://www.comicbooknoise.com/league and the COMICS PODCAST NETWORK! http://www.comicspodcasts.com/.

MY PULL LIST is my spoiler free comic book review blog of the titles I read every week. It can be found at http://mypulllist.blogspot.com/. Send e-mail about this blog to mypulllist@gmail.com.