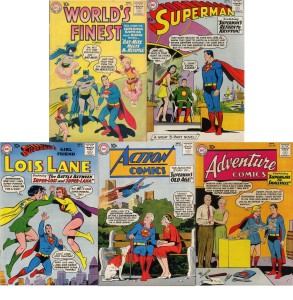 As I celebrate my 50th birthday this week, on this episode I feature the Superman stories that were published the month I was born: September, 1960! Thanks to MIKE’S AMAZING WORLD OF DC COMICS  for being an invaluable resource for this episode, as always!

– WORLD’S FINEST COMICS 113: published on September 6, 1960 and edited by Jack Schiff. The cover was pencilled by Curt Swan and inked by Stan Kaye. It featured the Superman / Batman story, BAT-MITE MEETS MR. MXYZPTLK, written by Jerry Coleman, pencilled by Dick Sprang and inked by Sheldon Moldoff. This story was reprinted in BATMAN FROM THE THIRTIES TO THE SEVENTIES, WORLD’S FINEST COMICS ARCHIVES vol. III and SHOWCASE PRESENTS: WORLD’S FINEST vol. II. (I may have mistakenly said vol. III. That’s what I had written in my notes.)

The remaining Superman related titles were edited by Mort Weisinger.

– SUPERMAN’S GIRL FRIEND LOIS LANE 21 was published on September 22, 1960. The cover featured the second story in the issue, and was pencilled by Curt Swan and Kurt Schaffenberger (who inked Lois Lane and maybe Lana Lang). the rest of the cover was inked by Stan Kaye. THE LOIS LANE DOLL was written by Edmond Hamilton and drawn by Kurt Schaffenberger. It was reprinted in SUPERMAN: THE BOTTLE CITY OF KANDOR. THE BATTLE BETWEEN SUPER LOIS AND SUPER LANA was drawn by Kurt Schaffenberger. The writer credit was unknown. It was only reprinted in 80 PAGE GIANT #3, with the cover date of September 1964.

– ADVENTURE COMICS 278: The cover was drawn by Curt Swan and inked by Stan Kaye. SUPERGIRL IN SMALLVILLE was written by Otto Binder and drawn by Al Plastino. It was reprinted in SHOWCASE PRESENTS: SUPERGIRL vol. I.

SUPERMAN FAN PODCAST is a proud member of the LEAGUE OF COMIC BOOK PODCASTERS at http://www.comicbooknoise.com/league and the COMICS PODCAST NETWORK! http://www.comicspodcasts.com.

MY PULL LIST is my spoiler free comic book review blog of the titles I read every week. It can be found at http://mypulllist.blogspot.com. Send e-mail about this blog to mypulllist@gmail.com.