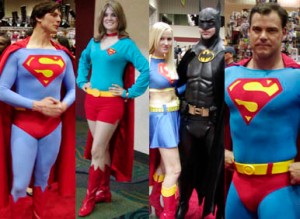 In this final MegaCon 2011 episode I review the panels I attended which I was not able to post audio for, as well as share my final thoughts about the convention. I also mention Billy Tucci’s upcoming story for BIRDS OF PREY for DC Comics, although I don’t know when it is scheduled to be published.

The panels I talk about in this episode are:

– THE NEW YORK CONNECTION: Amanda Conner, Frank Tieri, Jimmy Palmiotti, Joe Jusko, Nelson DeCastro and Billy Tucci talked about growing up in the NYC area (except for Amanda) and shared a lot of funny stories about working together in the comics industry while they all lived there.

– SPOTLIGHT ON DC COMICS PANEL: Geoff Johns, Dan Didio, Steve Scott, Rob Hunter, Ethan Van Sciver and Tony Bedard. I only attended part of this panel, since the previous one ran late. This panel was standing room only, but I did catch the brief discussion about the Doomsday storyline leading into ACTION COMICS 900. Dan Didio also responded to a compliment from the audience about DC’s price reduction back to $2.99.

– THE FUTURE OF COMICS AND NEW MEDIA: Darwyn Cooke, Terry Moore and Jim Valentino discussed the potential they see in comic book storytelling through digital distribution.

– THE DO’S AND DON’TS OF COMICS: Steve Scott, Allen Bellman, Frank Tieri, Nelson DeCastro and Paolo Rivera discussed the ins and outs of becoming and remaining a comic book professional.

Another panel I attended which I failed to mention was titled, SUPERMAN’S FATHER, which was a Q & A with actor John Schneider,who portrayed Jonathan Kent on the TV show SMALLVILLE. He had a great sense of humor in relating stories about his acting and music career, as well as his future projects after SMALLVILLE.

The theme of this podcast is PLANS IN MOTION, composed by Kevin MacLeod, and part of the royalty free music library at http://incompetech.com.

MY PULL LIST is my spoiler free comic book review blog of the titles I read every week. It can be found at http://mypulllist.blogspot.com/. Send e-mail about this blog to mypulllist@gmail.com.

Superman and all related characters are trademark and copyright DC Comics. Any art shown on this podcast is for entertainment purposes only, and not for profit.