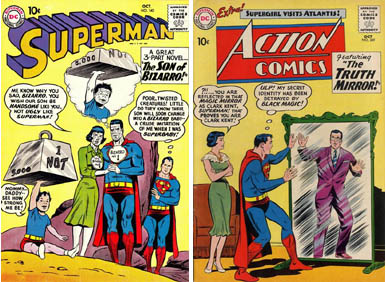 SUPERMAN 140, October 1960, was published on August 4, 1960. It contained 32 pages for the cover price of 10¢. Mort Weisinger was the editor, and the cover was pencilled by Curt Swan and inked by Stan Kaye.

ACTION COMICS 269, October 1960, was published around August 30, 1960. It contained 32 pages for the cover price of a dime. Mort Weisinger was the editor, and the cover was pencilled by Curt Swan and inked by Stan Kaye.

Superman starred in THE TRUTH MIRROR (12 pgs.), written by Jerry Siegel, pencilled by Curt Swan and inked by George Klein. This story has been reprinted in SHOWCASE PRESENTS: SUPERMAN vol. II, and was Siegel’s 18th Silver Age Superman story, and his 44th overall for this era.

Check out SLIPSTREAM, the weekly web comic book I’m drawing and lettering, which is written by Jeffrey Taylor, co-host of the FROM CRISIS TO CRISIS PODCAST and contributor to the SUPERMAN HOMEPAGE. New pages of SLIPSTREAM can be found each Saturday at http://www.clockworkcomics.co.uk. Adam Dechanel, another contributor to the SUPERMAN HOMEPAGE, also writes and draws E. O. S. for Clockwork Comics, and new pages are available on Tuesdays and Thursdays.
The new home for THE SUPERMAN FAN PODCAST is http://thesupermanfanpodcast.blogspot.com. Send e-mail to supermanfanpodcast@gmail.com.