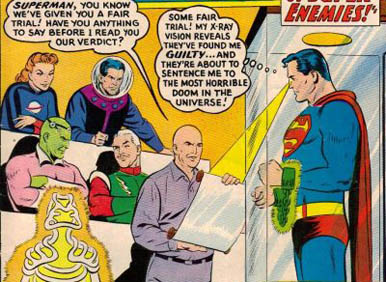 ACTION COMICS 286, March 1962, was published around January 30, 1962. It contained 32 pages for the cover price of 12¢. Mort Weisinger was the editor, and the cover was pencilled by Curt Swan and inked by Sheldon Moldoff. According to Mike’s Amazing World Of DC Comics, this issue had a circulation of 485,000 copies.

– The fourteen page Superman story was titled, THE JURY OF SUPER-ENEMIES, written by Robert Bernstein, pencilled by Curt Swan and inked by George Klein. This story has been reprinted in SHOWCASE PRESENTS: SUPERMAN vol. III.

– Supergirl starred in the 12 page story, THE DEATH OF LUTHOR, written by Jerry Siegel and drawn by Jim Mooney. This was Siegel’s 64th silver age Superman Family story, and his 103rd overall for the era. Previously, he wrote two stories for ADVENTURE COMICS 293, February 1962, published around December 28, 1961: THE LEGION OF SUPER TRAITORS, pencilled by Curt Swan and inked by George Klein, and THE GOOD DEEDS OF BIZARRO LEX LUTHOR, drawn by John Forte. Siegel also wrote one story for SUPERMAN’S PAL JIMMY OLSEN 59, March 1962. published around January 2, 1962: STRANDED IN EVOLUTION VALLEY, also drawn by John Forte.

Also highlighted in this episode are the ads and other features in this issue, including the METROPOLIS MAILBAG letter page.

Elsewhere in DC Comics, 28 titles carried the March or March/April 1962 cover date, according to Mike’s Amazing World Of DC Comics.

Next Episode: METROPOLIS HERE WE COME! where I preview the 35th SUPERMAN CELEBRATION which will occur from June 6 – 9, 2013, and my family and I will attend for the first time.