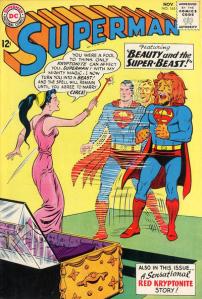 SUPERMAN 165, November 1963, was published around September 19, 1963. It contained 32 pages for the cover price of 12¢. Mort Weisinger was the editor, and the cover was pencilled by Curt Swan and inked by George Klein. They were the art team for this issue’s first of two stories, which have been reprinted in SHOWCASE PRESENTS:SUPERMAN vol. IV.

– BEAUTY AND THE SUPER-BEAST (14 pgs, Part I was 7 pgs.), was written by Robert Bernstein. Part II was titled CIRCE’S SUPER-SLAVE.

– THE SWEETHEART SUPERMAN FORGOT (12 pgs.), was written by Jerry Siegel and drawn by Al Plastino. This story was also reprinted in SUPERMAN 222, December 1969/January 1970, published on October 7, 1969, and in SUPERMAN IN THE SIXTIES. This story was Siegel’s 46th silver age Superman story, and his 150th overall for the era, if my count is correct.

Also covered in this episode are the issue’s ads and other features, including the METROPOLIS MAILBAG letter column.

The Superman Fan Podcast is now available on Stitcher, for your smart phone, tablet or computer.

SUPERMAN FAN PODCAST is a proud member of the following:
– The LEAGUE OF COMIC BOOK PODCASTERS at http://www.comicbooknoise.com/league ,
– The SUPERMAN PODCAST NETWORK at http://supermanpodcastnetwork !

– COMICS PODCAST NETWORK! – http://www.comicspodcasts.com/,
– The SUPERMAN WEBRING of websites, and

– The SUPERMAN PODCAST NETWORK at http://supermanpodcastnetwork !